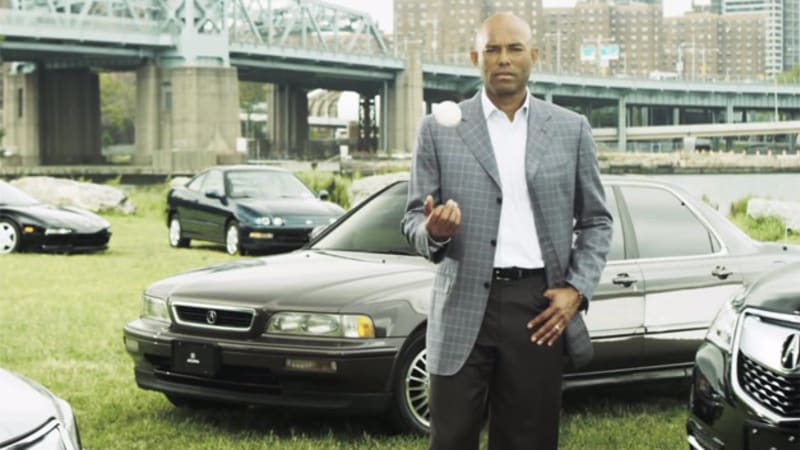 By: Linda N. Ellington
In: Dealer association
With: 0 Comments
Memorable Acura Models From The Past Appear In New Ad Campaign With Mariano Rivera

The new “Legends” campaign for New York Acura dealers continues a partnership that provided $ 800,000 to the legendary pitcher’s charity.

NEW YORK, (September 23, 2013) – Mariano Rivera has been a loyal Acura owner since 1995, when he made his big leagues debut. Since then, the brand has evolved and so has its career. These aspects are at the center of a new advertising campaign with the future Hall of Famer and Acura dealers in New York, which integrates the well-known Acura models of the past with the 2014 models.

Campaign ads, titled “Legends,” feature the redesigned 2014 Acura MDX and 2014 RLX flagship sedan. Spots include cameos from memorable Acura models: a 1991 Legend, a 1995 Integra and a 1991 NSX. The commercials also feature a voiceover from Brooklyn-born actor Steve Schirripa, best known for his role as Bobby “Bacala” Baccalieri in the HBO hit drama The Sopranos.

“The spots are a nod to Acura’s history and the years that coincided with Mariano’s career,” said Scott Rodgers, creative director at Tier10 ad agency, which developed the campaign concept. “The advertisements are aimed specifically at Mariano, whose interactions with iconic Acura models involve reflecting on the development of his legendary career as well as the evolution of Acura.”

One of the interesting aspects of the brand’s evolution, according to Rodgers, involved the third generation Integra, produced from 1993 to 2001. This model has a close connection to Rivera’s career and current Acura cars.

“Just as the third-generation Integra was known for its iconic round headlamps, the new Acura features the iconic Jewel Eye headlamps, and we have hinted at this development in the commercials,” he said. “We used a ’95 Integra in the spots because 1995 was the year Mariano made his debut with the Yankees and when he bought his first Acura.”

The hardest part of the shoot was getting the memorable Acura used for the spots. This required a creative approach from photographer Douglas Sonders, co-founder of spot production company, 8112 Studios. He used the extensive social media reach of his 8112 Studios and Douglas Sonders Photography Facebook fan pages, as well as his Twitter followers, to find the three vehicles in mint condition with original paint and parts.

“Social media saved our day,” Sonders said. “After days of cold calling and emailing all of our contacts, we ended up finding everything we needed within 24 hours of just asking our contacts online for help. amazed at how helpful people online can be if you ask nicely. ”

The all-black-on-black 1991 NSX came from the president of the NSX Club of America and was 53,000 miles long. The 1991 Legend was one of the cleanest stock vehicles of its kind Sonders had ever seen.

The 1995 Integra was the most difficult to find in perfect condition due to the popularity of the vehicle with street racing style modifications. Fortunately, they were able to find a dark green Integra with only minor cosmetic blemishes that were easily removed with just a few details.

The ads will start running in the New York market in mid-September. Tier10 has also produced a web-only series of behind-the-scenes videos from the shoot, which will be available on the New York Acura Dealers Facebook page.

The multiplatform campaign will also feature the hashtag #BeLegendary on all social media deliverables. Additionally, there will be a Facebook contest that fans of the New York Acura dealer page can enter to win a personal encounter with the legend himself.