Benson is a finalist for National Auto Dealer of the Year 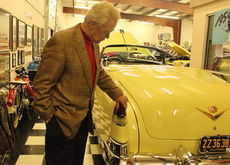 John Montgomery, who sells Fiat and Alfa Romeos, said Benson hired him on site when he identified the Cadillac that was being powered by lifting the tail light to access the gas tank.

Jim Benson hosts the BensonFAST fundraiser each October, a family event, to support Greer Community Ministries and Meals on Wheels.

Jim Benson will be honored at the National Automobile Dealers Association’s 2018 NADA Show in Las Vegas in March as one of 47 nominees for the TIME Dealer of the Year award.

Benson, 81, is South Carolina’s representative for the auto industry’s most prestigious and coveted honors. The recipients are some of the nation’s most successful auto dealerships who also demonstrate a long-standing commitment to community service.

â€œHaving the opportunity to own and start a family business is the most rewarding thing that has happened to me,â€ Benson said. “And it means so much that our children and grandchildren are following in my footsteps.”

Benson, who attended Greer High School until Grade 11, was always an entrepreneur.

At 12, he financed a new bike at his local hardware store, which he used to deliver newspapers. â€œOnce I paid for the bike, I bought a new Whizzer motorcycle for my paper route and finally a scooter,â€ he said.

Benson also worked for his father installing television antennas, as well as at a local gas station and factory, and he served in the U.S. Army Reserve. â€œWorking at the factory was the hardest job I’ve ever had, and I hated it,â€ Benson said. He was earning $ 37 a week in third-shift work.

At the age of 17, Benson began hauling used cars from Philadelphia to South Carolina as a truck driver and realized there was money to be made in the used car sector. â€œSometimes buyers would pass on a car that I thought was a good car, so I would buy it, take it home, fix it and sell it,â€ Benson said.

Benson married his wife Evelyn in August 1956 and opened a used car fleet in Greer. Benson began selling new Chrysler and Plymouth models in the field in 1964 at the request of a Chrysler open point manager.

â€œI sold 300 cars in that first year and in June 1965 I opened a new store,â€ he said. “In my 52 years as a Chrysler dealership, our store has always been the number one in the state.”

Today, Benson has several dealerships in Greer and Easley, representing the Alfa Romeo, Chrysler, Dodge, Fiat, Ford, Jeep, Nissan and Ram brands. Her son, daughter, son-in-law and three of her five grandchildren all work for the company.

Benson has dedicated his time, talent and resources over the years to make Greer a better place to live and work. He has been a member of the Grand Greer’s Chamber of Commerce since 1965, having served on its board of directors for eight years and as president in 1973. â€œThat year we raised funds to completely renovate the buildingâ€ , Benson said. “And this year, I’m doing a fundraiser at Benson Automotive Memory Lane, which houses my vintage car collection, to raise money again to renovate the chamber building.”

Benson donated millions of dollars to Greenville Technical College for upgrades and scholarships. The school’s Greer location was renamed Benson Campus in recognition of his generous donations. â€œThis honor meant the world to me and my family,â€ he said. â€œTech schools do a wonderful job teaching young people professional skills so that they can go out into the world and make a living. “

Kids Planet at Century Park will be improved with funds pledged by Benson. “I donated money when it was built 30 years ago with all the wooden structures, and now the city is going to demolish the park and completely rebuild it, to open in 2018,” he said. declared.

Benson’s support has been invaluable for Partnership for Tomorrow, an economic development effort made up of business, civic, government and community leaders to improve the Town of Greer. â€œI donated to the program and bought a clock to put at the entrance to downtown Greer, which is dedicated to the memory of my father, who was also a local businessman,â€ he said. -he declares.

â€œWe salute this exceptional group of nominees for the TIME Dealer of the Year 2018 award,â€ said Tim Russi, president of auto finance for Ally Financial. â€œThese dealers are local pillars of strength, leadership and generosity, and Ally is proud to celebrate their stories and recognize them for their commitment to ‘doing it right’ in their communities. “

A founding member of the Sertoma Club of Greer, a group that works to improve the quality of life for those affected by hearing loss, Benson is also a big supporter of Greer Community Ministries Meals on Wheels, for which he organizes an annual race. of 5 km. and auto show.

The award is sponsored by TIME in association with Ally Financial and in cooperation with NADA. A panel of faculty members from the Tauber Institute for Global Operations at the University of Michigan will select a finalist from each of the four NADA regions and a National Dealer of the Year.