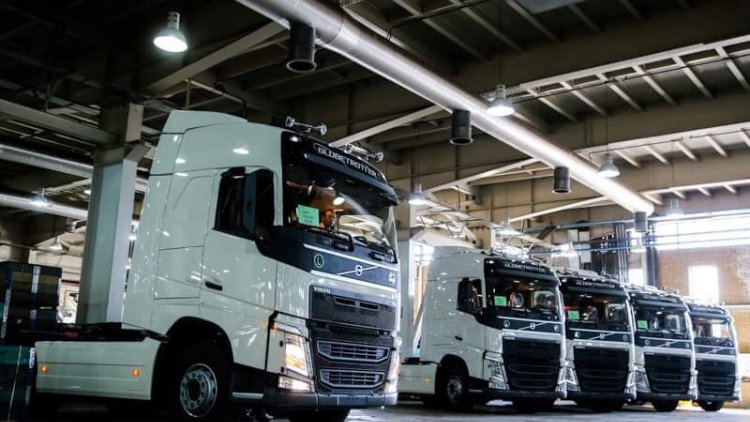 By: Linda N. Ellington
In: Truck manufacturers
With: 0 Comments

With the implementation of the nuclear deal and the easing of economic sanctions last year, European heavy truck manufacturers are re-entering Iran. The comeback has given local truckers and the transportation industry some hope that the dominance of shoddy Chinese trucks is coming to an end.

After months of arduous negotiations, the historic agreement between Iran and the six world powers, known as the Joint Comprehensive Plan of Action, entered into force in January 2016. Since then, European auto industries have started to enter into joint production agreements with local companies.

Prior to the tightening of sanctions in 2012, Iran was among the largest truck markets in the Middle East in which European manufacturers dominated. According to data published by the American management consulting firm Arthur D. Little, some 50,000 commercial vehicles were sold each year in Iran and the country held 38% of the heavy-duty market in the Middle East. In 2013, sales fell sharply to a massive 20% year-on-year decline.

With the imposition of the sanctions, the big names in the foreign truck manufacturing industry chose not to leave a void in their wake that was only filled by the Chinese waiting behind the scenes.

Tehran’s government, struggling to replace aging vehicles in its freight truck fleet, had no choice but to let shoddy Chinese auto companies in. Some of the Chinese companies that have established themselves in Iran in the past six years are China National Heavy. Duty Truck Group, Foton, FAW and Dongfeng.

With local truckers reluctant to buy Chinese trucks, heavy-duty sales declined, and as a result, according to data released by the Ministry of Roads and Urban Development, the average age of commercial vehicles has reached 16.4 years. in 2017, up from 14.9 years in 2012. Cities and towns across the country shows that there are still heavy-haul trucks that were built four decades ago.

Due to constraints during years of sanctions, demand for truck replacements in Iran is now significant, which should boost sales, a promising prospect that has prompted European truck makers to take a close look at the prospect of restoring relations. business and joint ventures.

The Ministry of Industry estimates that around 140,000 commercial vehicles will need to be replaced in the coming years, including nearly 56,000 in the next three to five years alone.

Trilateral agreements have been reached between the Ministry of Roads, the Iranian Road and Transport Maintenance Organization and the Iranian Fuel Conservation Company to renovate the dilapidated intercity and intra-city transport fleet. SIAPA Diesel, Mammut Diesel and other small local businesses are to contribute to the programs.

Through the low-interest loan program, SAIPA Diesel will offer 3,000 Volvo trucks and Mammut is expected to deliver 5,000 Scania heavy-duty vehicles by the end of the current fiscal year which ends in March 2018. Both deliver now vehicles to government organizations. .

Daimler AG – The first of the truck manufacturers to make a foray into Iran was Daimler AG. The leading German company moved quickly to restore ties with Iran by signing preliminary agreements with Iran Khodro on January 17, 2016, a day after the nuclear deal eased crippling sanctions.

Daimler Trucks director Wolfgang Bernhard said last year: “There is a huge demand for commercial vehicles in Iran. We plan to quickly resume our business activities in the market there. The plans include a joint venture for the local production of trucks under Daimler’s Mercedes-Benz brand, a collaboration in engine production and the establishment of a sales section.

In a recent development, on September 12, Daimler and IKCO formally agreed on the import of heavy-duty vehicles and the production and assembly of Daimler trucks in Iran.

Volvo Trucks – The Swedish company has made a comeback with a joint venture agreement with SAIPA Diesel.

Under an agreement signed in July, SAIPA Diesel will assemble 3,500 Volvo FH heavy-duty units during the current fiscal year. According to the agreement, 5,000 units will be assembled next year.

Scania – Another Swedish-based auto giant interested in working with Iran is Scania. When other European heavy truck manufacturers withdrew due to sanctions, Scania was one of the few international players to endure.

The company is present in Iran through importation and local assembly in collaboration with Mammut Diesel. According to the company’s website, some 990 trucks were delivered to Iranian buyers in 2016.

Tobias Segerstad, head of Scania’s Iran department, said the country is a strategic market for his business in the short to medium term.

Renault – The French car company with a long history of presence in Iran initially seemed uncertain about selling its heavy-duty vehicles in the country and postponed its return until the JCPOA anniversary earlier this year.

The Renault T, C and K series are expected to enter the market through imports. The company is also in talks with SAIPA Diesel to produce the D-Wide mid-range trucks in Iran.